What started the Labor Day fires?

Many of the fires in Oregon were ignited because strong winds blew down energized power lines, which then arced and started grass and brush on fire.  These fires were driven by high winds which ignited homes and forests on fire, and blew up overnight. Power lines also came down and ignited fires near Otis in Lincoln County, in the North Umpqua, along the McKenzie in Blue River and Vida, and along the Santiam Canyon.  In the towns of Gates, Mill City and Lyons, the fires burned homes and killed the trees near those homes, yet throughout the town you will find many green trees. The patterns of destruction in many of these cases show that the primary cause was human-caused ignitions and fire spread driven by extreme winds. 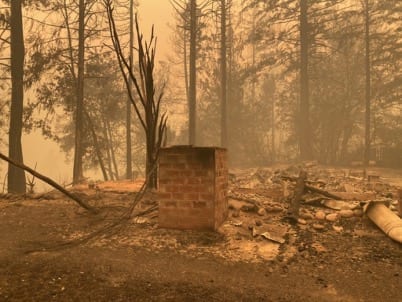 “Eyewitness accounts suggest that several were started by electrical lines and equipment buffeted by the historic windstorm that whipped across the state for three days.”