Three years after fire burned through the Gorge, the Eagle Creek trail has re-opened. Crews led by the Pacific Crest Trails Association worked through rain, snow, sleet, wind and challenging conditions over the three years to lovingly restore the trail.  While the fire burned a perimeter of 50,000 acres, only around 8,000 acres burned at high severity.  Before the smoke cleared, industry and its backers sought to use the fires to push for cutting and replanting the Gorge. Oregonians overwhelmingly opposed efforts to open up the Gorge to logging. Trailkeepers of Oregon, Friends of the Gorge, Pacific Crest Trail Association stepped up to work with Oregon State Parks and the Forest Service to form dozens of expert trail crews to repair and re-open trails.   At the same time, wildlife and time-lapse photographers set out to capture the Gorge as the new forest emerged from the burn.

Even in those areas, bears, cougars, elk, bobcat, deer, skunk, coyote and more were captured thriving.  New growth burst from the forest floor.  “Trail crews had to cut downed logs, replace bridges and contend with ever-present landslides and rockslides.”

A hearty Thank You to all of them for their efforts. 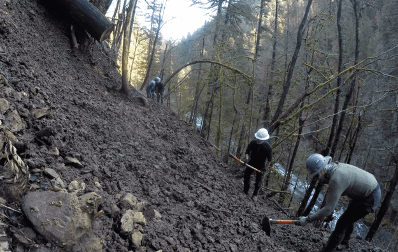